What have I been up to lately?

Well, as the title suggests, this is going to be general mash-up of just stuff I've been doing lately. I know I haven't been posting as much this semester, but with my internship and classes and homework and regular life stuff, I've been busy and have had a hard time making the time. If we're facebook friends, you're probably aware that I went to Versailles last weekend. I've also been hanging out with new and different people this semester, so I'm going to tell you a bit about them. I also had a really interesting experience involving a Stephen King book this week. So it's been an interesting couple of weeks, to say the least.

Last weekend I went to Versailles with my study abroad program. I'm not going to spend too much time telling you about the Château, because this was my second visit and I don't have a lot of new things to add. The one really cool part about our visit to the Château was that we got a private tour (en Français, of course) which meant we got to go see some of the private exhibits. For example, we got to go into the private living area of the Royal Family and see the Opera as well as actually go inside the Chapel (regular visitors only get to look inside from a pretty small doorway). 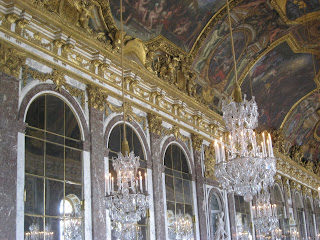 This is the famous Hall of Mirrors. It's very difficult to take a picture that captures the full scale of this room, but this was the best one I got that had a good view of the ceiling in it. When the Château was built, mirrors like this were very expensive, and rarely used purely for decoration. Here they are for decoration, but actually the primary purpose was to disorient visitors. Many State rooms in other countries as well are designed to disorient visitors. Take the Oval Office, for example. Its unusual shape was meant to make others uncomfortable and disoriented. Just a little fun fact. 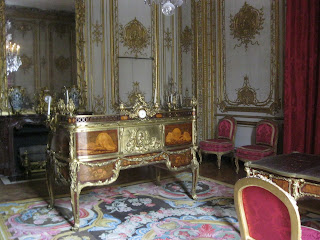 This is the King's private study. I loved that desk and the fireplace immediately behind it. Just so French. I felt like it was really indicative of the luxury of the French court before the Revolution. 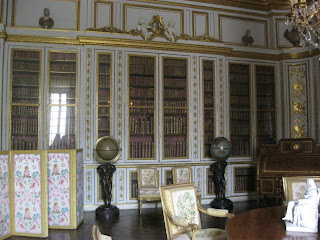 If you know me at all, you must know that this room was my favorite from the Château. All of these books are real, historical, generally first edition books that the King would have in his library. It was a beautiful sight. 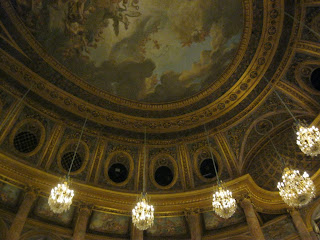 This is the royal Opera. It was very hard to get a good picture of the whole thing, but I really loved the ceiling and the chandeliers. Felt like that was the best part 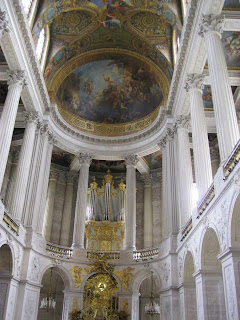 The chapel that I mentioned earlier. 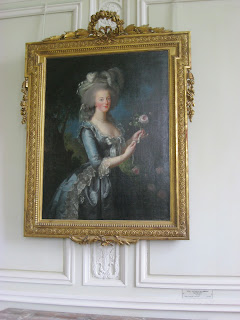 The thing about this visit to Versailles that set it apart from the rest was that I finally got to go to the Trianon and Hamlet. In case you don't know, that's were Marie Antoinette spent most of her time. It consists of several buildings, the Trianon, and a little Hamlet built in the Austrian style (Marie Antoinette was originally Austrian). The Trianon was a place were Marie could go to escape the court and just be herself. It's wonderful. 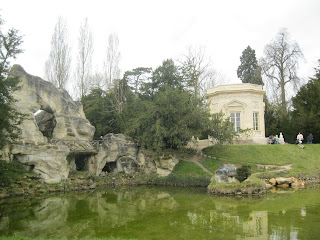 Gardens around the Trianon. That rock formation on the left is actually a bridge; you have to walk on a path through the rock formations to get across. 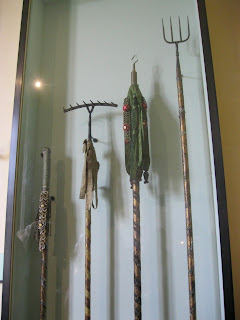 She actually decorated her gardening tools with ribbons and bows. I'm completely serious. 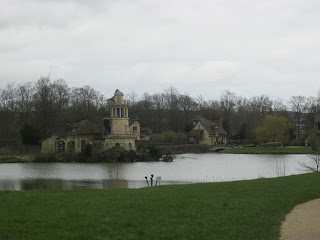 This is the Hamlet. It basically consists of about eight or so small buildings constructed in the Austrian style. Thatched roofs and all. 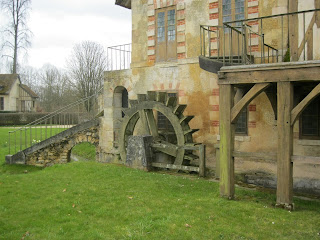 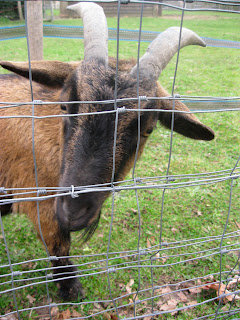 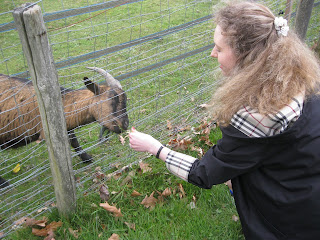 This is Spencer and a new friend we made at the Hamlet. His name is Georges and we are going to be best friends forever. Yes, he probably only liked us because we gave him grass and stuff to eat, but still; a new friend is a new friend, right?

That's it for Versailles. We had a wonderful full day outside of Paris. I've gotten some questions about some of my new friends these days, so I'm going to tell you a bit about them. 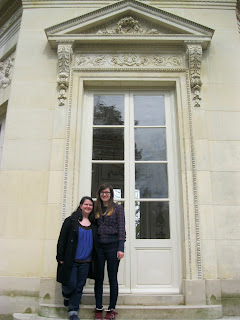 This is Ellen. She is really sweet and awesome. She goes to school in Texas, but is from Tennessee, so we spend most of our time in similar areas, which is sorta cool. She's into art history too, so she's generally a fabulous person. And she's cool with just wandering around Paris for the heck of it, with no real plan in mind. In other words, she's fabulous. 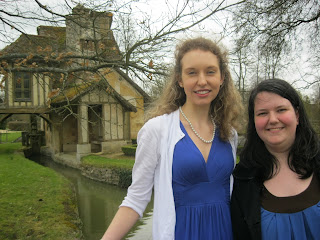 This is Spencer. She is equally fabulous. We've bonded over many things, including peanut sensitivity (she'll basically die if she's anywhere near them; I'm considerably milder, mostly just throwing up or breaking out or something) we also have a mutual friend back in the States, and we both go to Women's colleges. She is one of the nicest, sweetest people you'll ever meet, I guarantee it.


The other person with whom I spend most of my time is Lindsey. I don't actually have a picture of her to share. She's not a student on the program, she's just a really cool ex-pat that I met. She teaches 5th grade here in France and shares my obsession with Once Upon A Time. We're always chatting and fan-girling over all sorts of incredibly nerdy things. She's a bit older than I am, but if you know me, you know I tend to bond with people older than I am much more easily than those of my own age. Lindsey and I are such similar creatures that we get along most of the time like we've known each other for years, as opposed to just a couple of months.

One last little anecdote that, funnily enough, involves Stephen King and my father. Something you may not know about me is that I love Stephen King. I will read basically anything he writes, novels and short stories alike. I generally don't like graphic gory stuff, but when he writes it, it's not really gore if you ask me. It's rare to find a writer who can write an introspective story about a regular Joe in a motel contemplating suicide and a story about a guy subjected to torture by a South American government, involving exploding eyeballs and cooked flesh. It's a gift. And I keep coming back because his gore isn't gore for the shock factor; it's real, literary stuff. Last week, Ellen and I went to a little bookstore over in the 6th, and I found this great collection of Stephen King short stories, which I've been reading this week. And while I was reading them, a sort of strange thing happened. I started hearing the stories being read in my head by my Dad. And occasionally my sister Beth.

That may not make a lot of sense to you if you've only ever heard my Dad read from the pulpit, or if all you know about my Dad is that he's a minister. I grew up listening to my Dad read aloud to us. When we were kids, it was Harry Potter, Harriet the Spy, the Hobbit, Narnia, A Series of Unfortunate Events, and so on (complete with character voices, of course). When we got older, we moved on to David Sedaris and Sarah Vowell, with the occasional creepy story thrown in there, as well as an episode of "Selected Shorts" on NPR every week or so. But I think there's more to it than just that. Stephen King sounds like my Dad. Not their actual voices, of course, but the way they structure their sentences, the sorts of words they use, they way the characters approach certain problems. When it gets especially dark (like cannibalistic devil-man with a mouth like an oven that cooked the meat as he ate it) the voice changes to my sister Beth's. That girl has a dark imagination.

I guess my point is that it's been more than 8 months since I've seen any of my friends or family. That's by far the longest I've ever gone. And when you're separated from the people you love for that long, you start seeing (or hearing) them in the oddest places. Like Stephen King novels. Who'da thunk exploding eyeballs would make me think of my Dad?

So on that sort of weird note, I'll sign off. Just one more thing. I didn't end up getting the Ghost Ranch job out in New Mexico this summer, which means I'll be in Sherman for the summer. Haven't done that since high school, so I'm in the market for a job. If all else fails, I can volunteer or something at the Crisis Center, but they can't pay me for it because my sister runs the place (darn those family connections!). So if you Sherman people hear of anything you think I might be good at that pays actual money, let me know. Trying to have enough for a car by Christmas, next May at the latest. À bientôt!
Posted by Unknown at 10:41 PM